skip to main | skip to sidebar

Introduction to The Great Rabbit Spirit 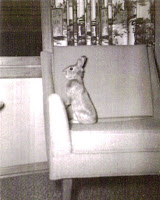 Rabbits have always been an important part of my life. When other little girls were playing with baby dolls, I was dressing my Steiff rabbits up in doll clothes. Should have been a clue to my parents …

My first encounter with The Great Rabbit Spirit came at age five. When I was very sick with the measles, my father found a wild baby rabbit trapped in our window well and brought it in to show his daughter. Itch, as he would be named, shared our home for the next four years.

It would be many years before my next close encounter with The Great Rabbit Spirit. In the 1980's and 1990's I returned to rabbits, but my focus was on the physical rabbit. During that time I adopted my first (outdoor) rabbit, was introduced to the concept of "house rabbits", and volunteered with a local rescue group. When I realized I was not well suited to work in rescue, I wrote Rabbit Health 101 which soon became Rabbit Health in the 21st Century. The first edition sounded like I had all the answers. With the 2nd edition, I realized there were no "one size fits all" answers. And today, as I am working on the 3rd edition not only do I know I don't have all the answers ... I'm not even I know the right questions! 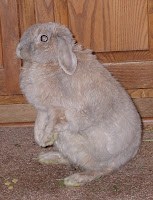 Although I would not realize it at the time, the moment I first saw Murray was the beginning of my introduction to The Metaphysical Rabbit. I had the honor of sharing my home with and caring for this special soul for almost five years. During that time he was my companion, teacher, and soulmate, and his life and death inspired King Murray's Royal Tail. Amazingly, HRH King Murray has become an even stronger influence in my life since his departure from his beautiful gray bunny-body in 2003, serving as my Spirit Guide, inspiration, and mentor.

In 2008 I was offered the opportunity to co-author When Your Rabbit Needs Special Care with Lucile Moore. In writing about alternative treatment options, I became more closely attuned with The Metaphysical Rabbit. Since then, The Metaphysical Rabbit has taken charge of my writing through stories for the book Touched by a Rabbit and this blog.

Note: A special thanks to Jennie Habernal for coming up with the title for this blog!